It’s a little after eight in the morning when Mom squeezes through the front door in her puffy purple coat, hangs her keys on the wall, and with a sigh drops her purse in one of the kitchen chairs.

“Never as bad as you were.” She peels off the puffy coat. “Smells good in here.”

“Coffee cake for an office birthday party.” I’ve just pulled it out; it’s sitting in its glass dish on a wire rack.

“Whose birthday?” She pours herself coffee from the pot that she started before she left at six.

“Todd.” I start fanning the cake with a baking sheet.

“That asshole? You’re making him a cake?”

I see her eyebrows raise over the rim of her coffee mug. Her words echo into it before she takes a sip. “From what you’ve told me, he doesn’t deserve a cake.” Then she drinks, cringing at its bitterness, and sets her mug down. “’Specially not one of yours.”

“Any twelve-year-old can make a coffee cake, Mom. It’s not that hard.”

I heave a sigh. “Because of course there’s a point…”

“My point,” she says, leaning over the counter, “isn’t how easy coffee cake is, it’s that you’re the one making it. You could be baking cakes for presidents, not Todd.”

“Not this again, Mom.” I hold my hand over the cake. It’s still too warm to cover. I have to be out the door for work in ten minutes. “You think I want to be baking a cake for Todd and his lackeys? But everybody knows I bake, so I get asked to do it.”

She settles herself on a barstool, one eyebrow still lifted in that quit-mouthing-off-and-listen-to-me expression that seems universal to mothers. “I think you should fish that culinary institute application out of the trash and mail it in.”

“It’s in the recycling, not the trash.”

I set the baking dish down with a slap. “Okay then, humor me. Why should I? They’ve rejected me twice, why should I keep trying?”

Mom wraps her hands around the coffee mug. “Because you’re young and you’ve got your life ahead of you. Because I’ve been driving a school bus for thirty years and I’ve seen what all those kids accomplished when they kept trying. Because between us, your father and I could fill a filing cabinet with job rejection letters.”

“You know they email that stuff now.”

“Because,” she says again, glowering, “everybody gets rejected. What makes some people different from all those other everybodies is that they kept trying. And we didn’t raise you to be an everybody.”

I sigh and roll my head back. The cake does smell amazing; I wish I could plate up a slice for me and my mom. We could enjoy it warm and it would take the burn out of the old coffee.

“I took the recycling out already.”

“Mom, I wish you would let this go.” I can feel tears stinging in the corners of my eyes. “I wanted this too, you know? And getting rejected once sucked, but twice? I don’t think I can…”

I can’t even finish the sentence. I squeeze my eyes shut. I feel my mom grip my hand.

Mine is a tenacious dream, apparently. I hear the word leave my mouth and the promise in it gives me a tingle of hope: “Yes.”

I open my eyes. Mom is teary, too, something that makes both of us feel awkward, so I go back to fanning the cake and she drinks more coffee.

“That’s not the only one you baked, is it?” she hints.

I grin. “The other one needed a couple more minutes. It can come out when the timer goes off.” 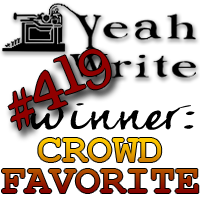