She started finding pomegranate seeds at the doorstep, and knew it was time.

Her mother caught her studying them in the autumn evenings, watching the ruby light glint within the little seeds. “Already?” she asked with a frown. The rhythm of her arms kneading her bread did not break.

“So it seems.” She ate the seeds, six in all, and turned to leave.

“You should not go.” Her mother’s trembling voice stilled her. “You do not have to go.”

“I do not need you to remind me what he did to me.”

“Then how can you go back to him?” The kneading stopped and Mother looked at her pleadingly. Her apron was clouded with flour.

“In order to have spring, there must first be winter.” And she left.

She went to the river, where the silent ferryman recognized her and took her across.  He seemed to row too slowly. Perhaps he, like Mother, regretted his role in their tale, and wanted to write a new part for himself.

She went next to the dog, who greeted her from the vast black gates as he always did: with a suspicious growl that ended in a sharp exhalation as he laid down to let her enter. She scratched one of his heads as she passed.

She walked on, into the formless black. She heard him before she saw him: he was sweeping, the dry wish wish of the broom echoing across the space. The sleeves of his black jumpsuit were rolled up and a blue cap covered his graying hair. He did not stop sweeping when he spotted her, though he continued to watch her from under the brim of his cap.

“Hello, little wife.” His voice was just as she remembered: a dry wind disturbing dead leaves. “You look well.”

“Hello, husband.” She studied the floor around him. The detritus of the dead had been swept into a pile: regrets, pains, coins, hopes, and all the other things the dead cannot carry with them. “You have been busy.”

“You know I like to get caught up on my work before you arrive.” He bared his teeth; Death cannot smile. He stopped sweeping and came towards her. “Come, then. Let us be reunited.”

She stepped back. “You will not touch me.”

She did not raise her voice; there was no need. She was queen of the underworld, not by choice, but ultimately by right. He had been so desperate to keep her that he gave her her strongest weapon against him. She only wished she had gathered the strength to use it sooner.

She also wished she could tell Mother she was safe, but as she’d said before she left, in order to have spring, there must first be winter. The story must still be told, but it would never be told the same way again – not if she had any say in it.

His voice took on a threatening edge. “There was an agreement.”

Her heart pounded but she stood straight and firm. “The agreement holds. The season will pass, as agreed.” She did not look away from him. “But you have touched me for the last time.”

It was he who dropped his gaze to the black floor. “Very well.”

She walked the clean-swept path deeper into the underworld, toward her throne. 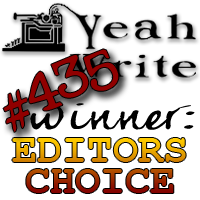 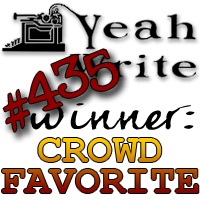 6 thoughts on “There Must First Be Winter”